The connections to these three family names, Resendez, Pena, Vela, have brought forth many interesting facts when researching.  The authors paternal grandmother, Guadalupe Leal de Guerra was born in Mendez, Tamaulipas. Her mother, Guadalupe Gonzalez, passed away during her birth and she was cared for as an infant by grand aunts, Maria Felicita Aguirre de Resendez and her sister Cornelia Aguirre. Family tales of the husband of Maria Felicita, Crispin Resendez, peaked interest in finding more information on the Resendez family. It is a family legend that Crispin Resendez was killed by persons who wanted to steal cattle from his ranch in the Mendez area.

This Resendez family from Mendez Map Shown was established in the area when it was called La Laja.  In this area there is another possible notable person that a Corrido was written about. El Corrido de Mariano Resendez is very well about a Contrabandista who was also killed by troops that were trying to prevent smuggling of Textiles into the area.  The Corrido and a translation is also attached.  This Mariano Resendez could very well be a first cousin of Crispin Resendez.  After careful research and collaboration with noted Historian and researcher, Homero Vera, he also concludes the Corrido, might be about this person. It is noted in the Corrido that Mariano Resendez was killed in Mendez, Tamaulipas.  The date of death recorded in the Corrido is not exactly matching to the data found on Mariano but it is close enough to make a good conclusion to being the same person. Writers of the rhymes of the Corrido sometimes change some facts to help carry the song.  Further data on whether Mariano Resendez was actually killed by the authorities in Mexico has been questioned and new facts may come forth in new research. Here is a picture of a  Pistol  owned by Mariano Resendez the Contrabandista.  It is a Hopkins and Allen, 44 Winchester pistol with engraving and chrome finish.  This pistol was manufactured in Norwich, Connecticut.  There is a date on the pistol of 1873.  It is not known if this was the model number or date of manufacture.  It is probably the date of manufacture.  The pistol is currently owned by a grandson of the Contrabandista and his family.

Research into the ancestors of Crispin and Mariano brought out the possibility this same Resendez family might be related to the Resendez family from Camargo and Ciudad Mier, Tamaulipas.  The attached map shows the distance involved in Ciudad Mier and Mendez and could the family have moved from their roots in the Mier jurisdiction to Mendez? Yes, is the conclusion, because it is revealed that Crispin was baptized in Ciudad Mier and shows the same grandparents as Mariano. There are facts  revealed in the book The Family Tree, Seabury Papers, by Joel Rene Escobar that Crispin has a brother named Mariano and both are sons of Tomas Resendez Vera and Teodora Garza Cantu on page 269.  It is very confusing because of the two Marianos that are first cousins but death records and marriage records reveal they are different persons. 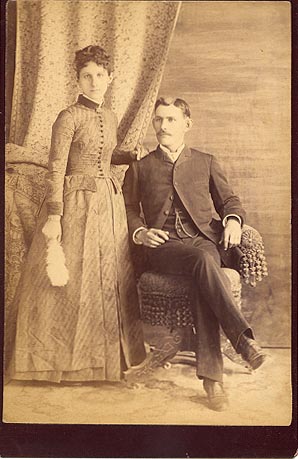 This wonderful picture was found in a house in Laredo, Texas by R. LaPerrière de Gutiérrez that was previously owned by the Medina Family. R. LaPerrière de Gutierrez tells the story on her webpage that Adeliada was later married to a Tomas Medina and [in 1896, Felix Fausto Medina del Barrio, is born 13 October 1897. Adelaida and Tomás had a brick house built (c. 1937) in the Azteca neighborhood (Barrio Azteca) in Laredo, on the lot just south of the property Pilarita owned since 1889. They were only able to enjoy it a very few years--Tomás died in 1942; Adelaida died at the end of March 1944. Felix F. Medina del Barrio married Alicia Magdalena Gutiérrez (b. in Guerrero, Tamaulipas) in June 1944. The Medina family continued living in the brick house until their respective deaths in1980 and 1995].

The webpage is found on the web at: Del Barrio Webpage placed by R. LaPerriere de Gutierrez has many more pictures of the Felix del Barrio and Pilarita Perez de del Barrio family and their children.

Many facts are bought out in researching, but there is always a chance that errors may be found as genealogy is always open to change when better facts are found. Research into the Petra Vela family was brought about because of the book, If You Love Me, You Will Do My Will by Hugh Aynesworth (Contributor), Stephen G. Michaud. In reading this book and its exciting court battles for Sarita Kenedy Easts vast ranching estate ( 400, 000+ acres) before and after her death, that interest was heightened with her Hispanic ancestors. Never did the author believe that connections to Sarita would be encountered from reading the book. A pedigree chart on Petra Vela is included with this article and the connection to her Vela and Resendez ancestors. After attending a conference in Houston, Texas, a speaker, Ana Carolina Crimm, mentioned that her research on Petra Vela shows that her first husband was never married legally to her. Crimm also mentioned that Luis Vidal might not have been killed by Mifflin Kenedys orders, a popular legend. These last facts are subject to great speculation and hopefully when her books are published it will be made clear.

The results of research into these three families, Resendez, Vela and Pena have proven that members of families relocated and established their own Ranchos to better themselves and to raise families. Movement from the town of Ciudad Mier to Mendez seems maybe not so far in todays times by fast auto but in the early 1800s it took days to make the journeys with more primitive modes of transportation. Research also proves that intermarrying between Mexican landowners daughters and arriving Anglo settlers was also happening. Fewer families in these early Mexican and Texas times produced kinship that are now being discovered which were known to these families in those early days.

If You Love Me You Will Do My Will, by Stephen G. Michaud, Hugh Aynesworth.

Discussion with R. LaPerriere de. Gutierrez on Felix B. del Barrio Family and collection of photographs.

Discussions with Baldomero Vela, Jr. on the Resendez Family.